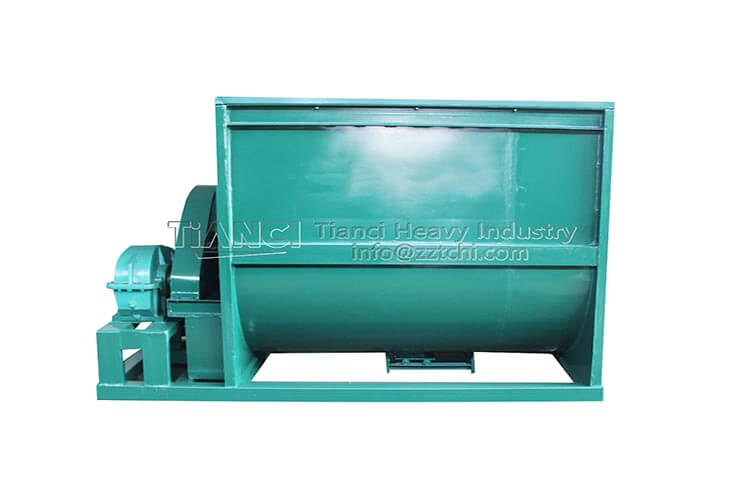 Share With:
SEND E-MAIL chat now
Horizontal mixer is a kind of fertilizer blending machine, it can mix the material with high uniformity and less residue. It is very suitable for the animal feed, concentrated feed, additive premix mixture. Mixed with high uniformity, less residue, suitable for more than two kinds of fertilizer, additive premix mixture.

The specific features of the horizontal mixer is as bellow
1) The material can be fully mixed, so mixing uniformity is highly improved.
2)The mixer structure is innovative in rotor structure , the minimum gap between the rotor and the shell can be adjusted to close to zero, effectively reducing the amount of material residue;
3) The machine is with grease to add pipelines, the overall structure is more reasonable, easy to operate and maintenance.

The working principle for horizontal mixer machine:
Horizontal cylinder body with rotating reverse the blade, the pulp into a certain angle of the material along the axial, radial cycle stir, so that the material can be quickly mixed .
Horizontal mixer performance characteristics, reducer drive shaft rotation speed and the structure of the blade will make the material gravity weakened, with the lack of gravity, the material size of the particles, the proportion of disparity in the mixing process is ignored
The intense mixing movement shortens the time of mixing, faster and more efficient. Even if the material has a specific gravity, the difference in particle size, in the staggered arrangement of the mixing blade fast and violent throwing thrown, but also to achieve a good mixing effect.
Inquiry

Please Feel free to give your inquiry in the form below. We will reply you in 24 hours..